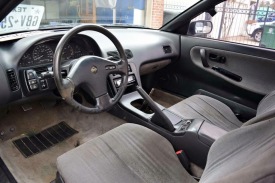 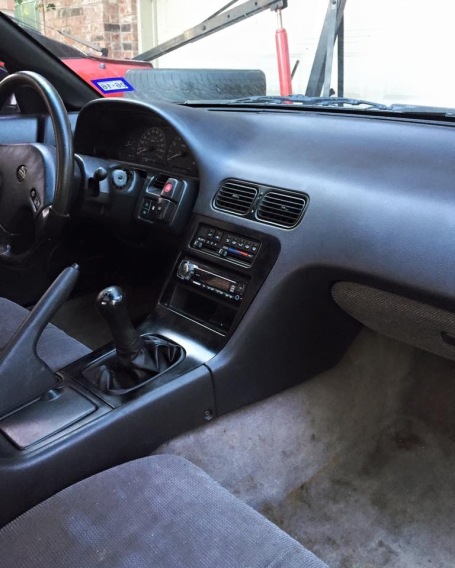 So after plenty of time deciding whether or not if I should create a wordpress, I have finally decided to pull the trigger.

I guess I’ll start by introducing myself. My name is Kevin Martinez and I live in Houston, Texas. I’m 19 years old at the time of this post, and I own a 1993 Nissan 240SX SE fastback which I am still in the process of building. Ever since I first started getting into cars I’ve been fascinated by the art of drifting and Japanese car culture. The past few years of my life have been a blur. I’ve met so many awesome people and learned so many things, it’s crazy to think about how much things have changed in these past couple of years. I have a lot of catching up to do.

It all started when I went to my first lonestar drift event. I saw the typical “missile cars” all over the place. Smashed up panels, missing lights, scuffed up and cracked fiber glass, replica wheels the whole 9. Then there was this group of guys that clearly stood out from the rest. Their cars were beautiful. They were all set up next to eachother so I knew they must’ve been friends or teammates of some sort. Their cars looked like they just got off the boat from a D1SL event from 10 years ago. It was absolutely mesmerizing. This exceptional group of guys I learned were Essence Garage. From that point forward, I knew EXACTLY what I wanted to achieve, and why I wanted to. Drifting was no longer about throwing together a pos 240 and not caring at all about the aesthetics of it.  I met my friend kip around this time and to my surprise he was close friends with them! He introduced me to them and I couldn’t believe how nice these dudes were to me. They didn’t know me at all yet they welcomed me with open arms. It was truly special feeling.

I decided to immediately get rid of the 1990 I had at the time and search for a much cleaner one. I wanted a chuki model (91-93) with all of the features except for Hicas and relatively low miles, damage, or rust. Eventually I found the perfect car! I found an unmodified (besides wheels and a radio) 1993 in sapphire blue with a blown KA. The engine didn’t worry me at all because my plan is to swap an SR into it eventually. I traded the gentleman and began the build.

To say that I’ve been bad at updating this blog would be a gross understatement. It has been a few years since I last visited this site. I am now 22 (23 in two months) and so much has happened in my life. I really regret not staying up to date here because now it’s going to be a little tougher to go into as much detail as I wanted to. Luckily I’ve taken plenty of photos along the way, and I haven’t lost much!

I think the way I want to go about this is to make a bunch of separate posts depicting what was done to the car in chronological order to the best of my ability. Since it’s been years I’m going to try my best to remember, although I’m sure no one cares if something is a little out of order.

So the way I like to think about how this build went is in two stages. When I first acquired the car I was devoting my time to being a full time student, and I had no time for a job. So progress remained stagnant for a while… it wasn’t until I took a break from school, and got a full time job that things really took off.

After I found a stopping point I returned to school for a couple semesters then took a second break for a year when the car REALLY took off..

So I’ll fast foreword to the first break where the car reached “Phase 1”. The original idea was to keep it simple, cheap, and reliable. I was going to swap another KA24DE into it , oem aero, and 17″ R33 GTR wheels to help the KA spin the tires. The inspiration came from Koguchi’s red 180SX from the late 90’s before it was painted black shown below.

I got started saving up money from work and from another S13 I had parted out. I took some some parts that I wanted from that S13 like Coilovers, and exhaust. I quickly installed them, and the journey began. 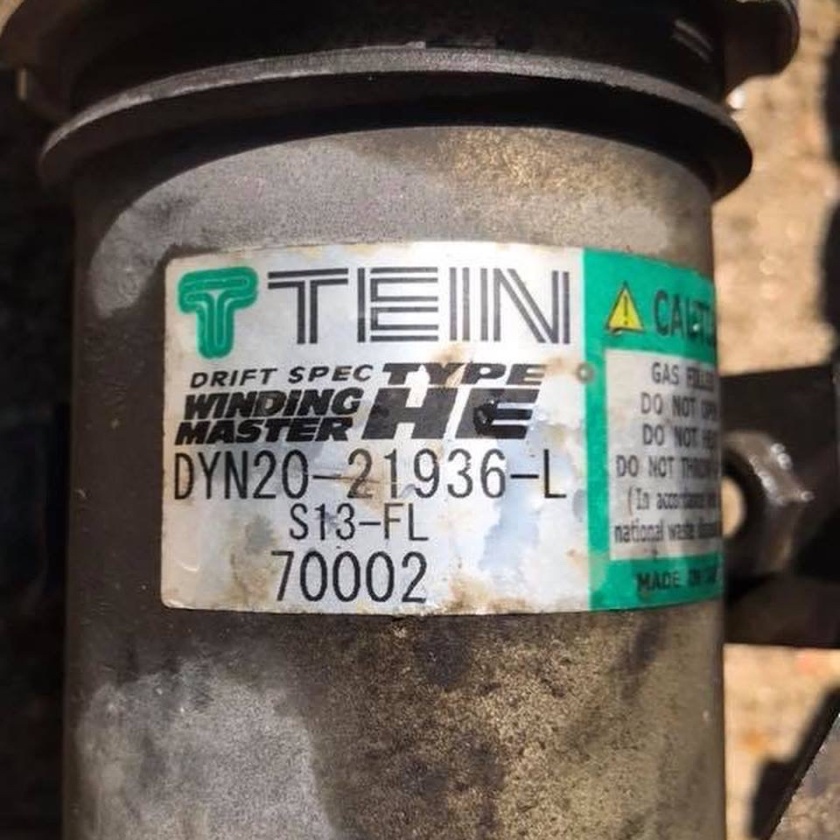 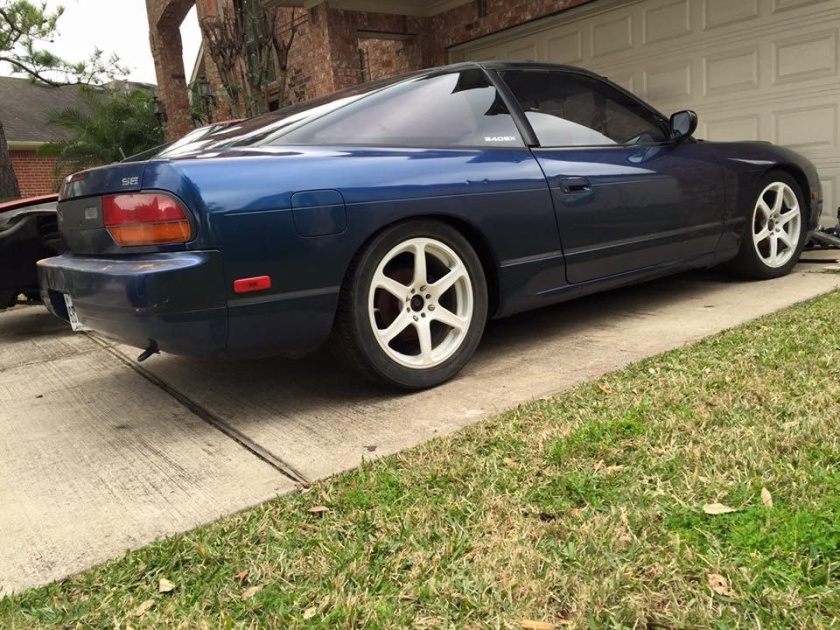 Next I had to get rid of the terrible wheels the car came with. I sold them locally and picked up a set of oem SE wheels. A buddy of mine Jordan was parting out his seafoam 2 tone coupe so I picked up his chuki sideskirts and pignose lip as well. This was how the car sat for a while 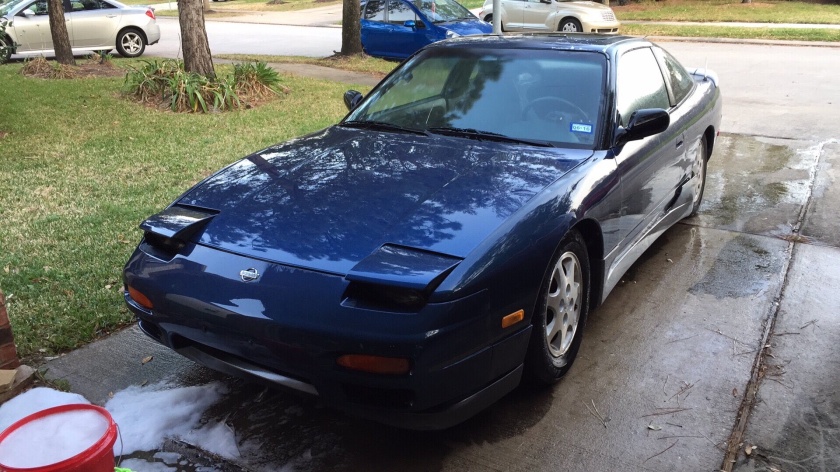 Next came time to start gathering parts. I needed to collect a bunch of parts so that I could install them all at once so that the car wouldn’t be on stands for too long (HOA is a real pain in my area).

First came the R33’s I picked up from Andrew Hudson (Cooljunction). Then my buddy Justin Rogers (nightparade) was parting out his car so I scooped up his big brake kit which consisted of 30mm aluminum Z32 calipers along with Z33 track rotors with the adapter and steel braided lines.

Some of the things I picked up around this time don’t make much sense because I was looking for deals instead of getting what I actually needed. So for example I picked up a 330mm black/black Nardi Classic wheel off of zilvia instead of conversion hubs lol. Along with the wheel I ordered a brand new complete carpet set from stockinteriors.com to replace the moldy/torn unit that was in my car. I also picked up a set of ISR pro series arms so that I could have one less thing to install later on. 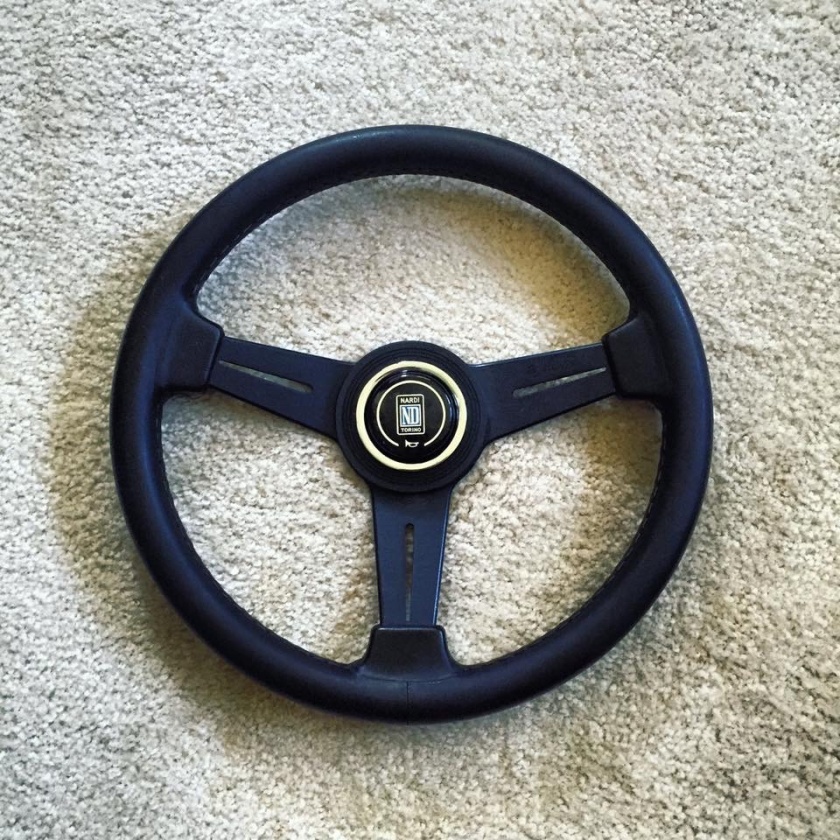 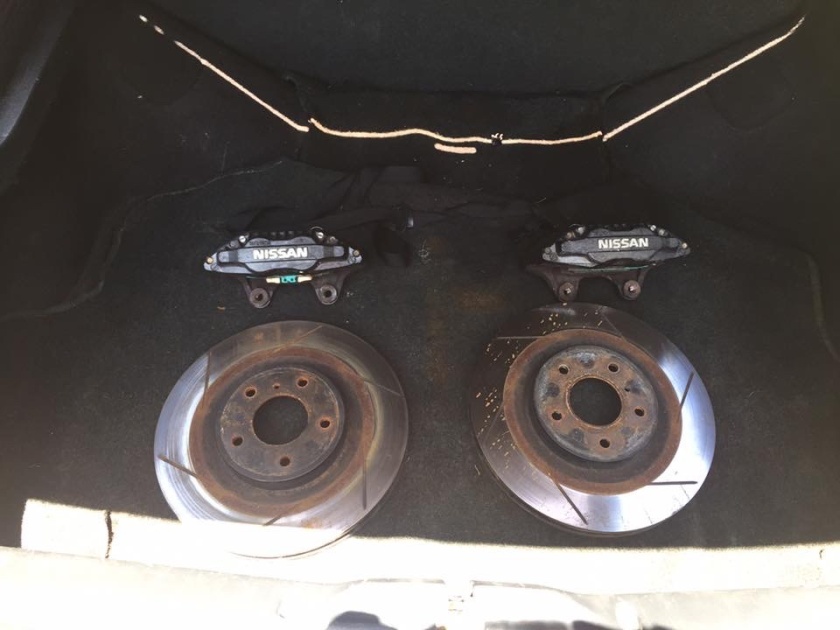 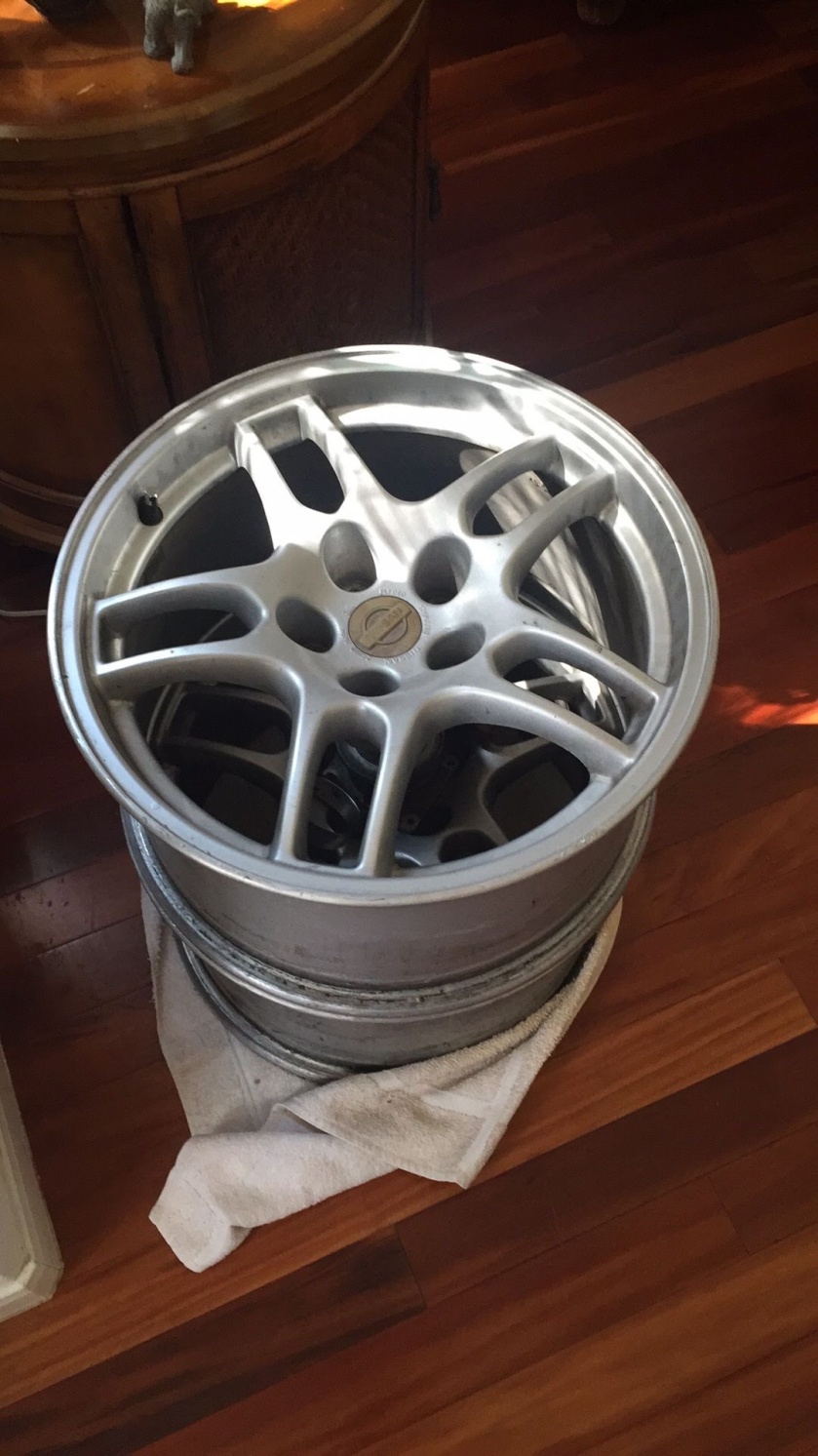 Somewhere around this time was when I pulled the blown KA and sold it off to a buddy in preparation for its new heart. Below is a sneak peak at its replacement. 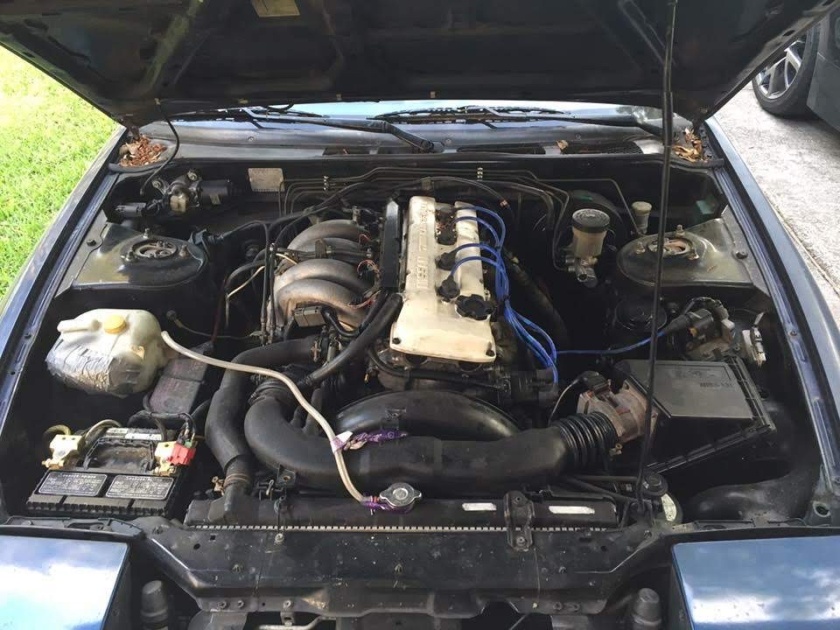 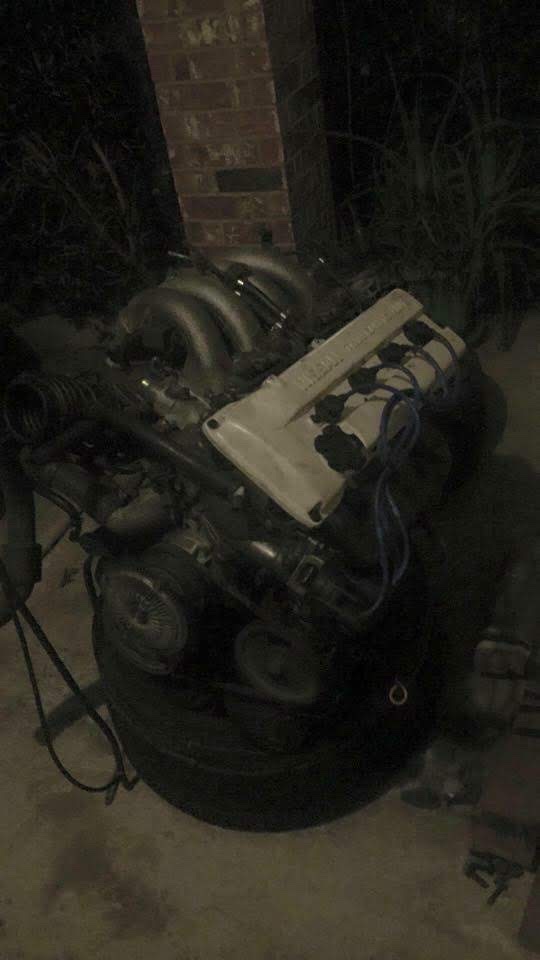 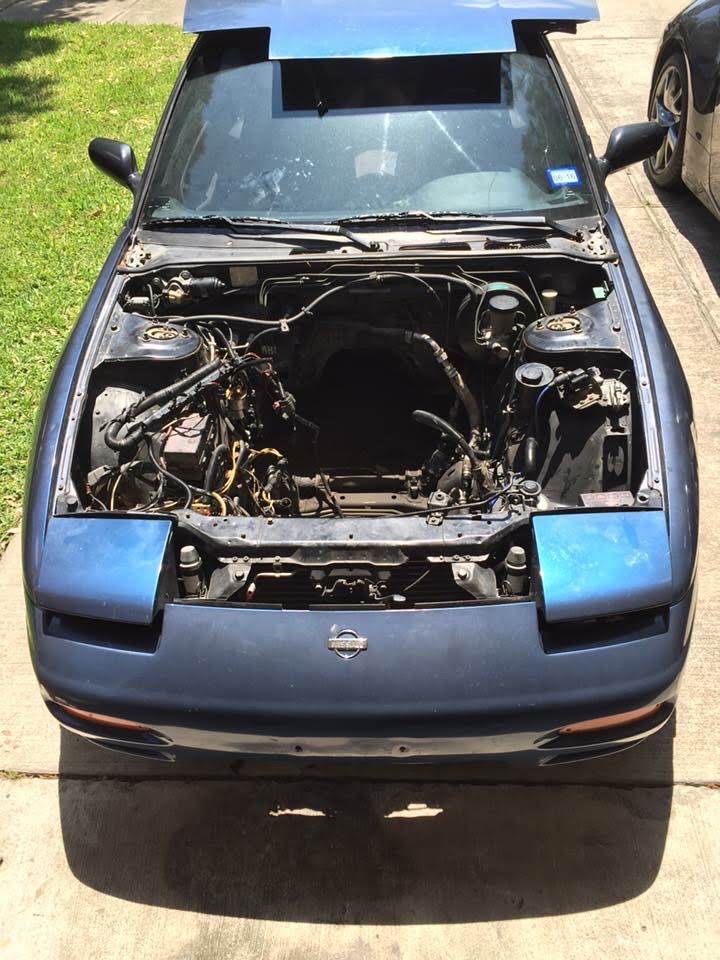 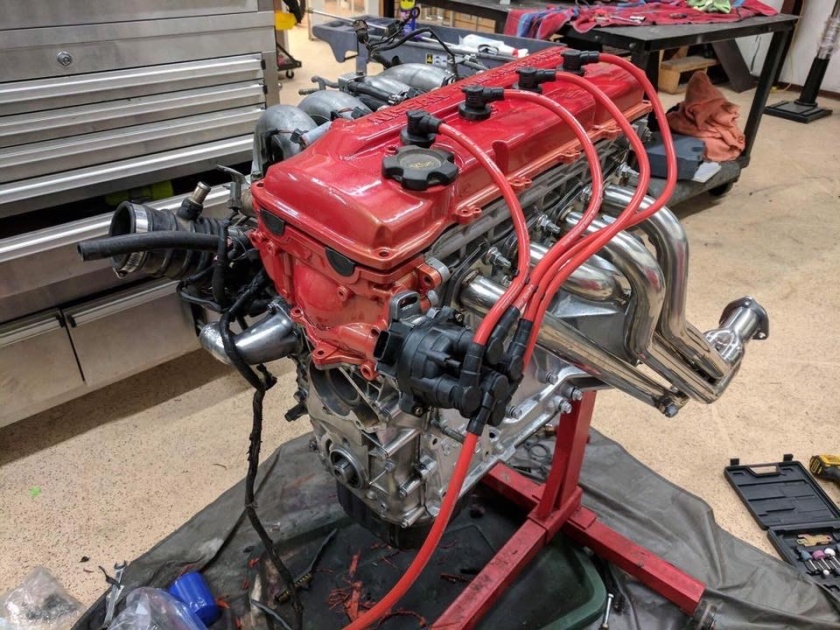 I think this is a great stopping point for now 🙂 this post has already gotten plenty long. I’m going to have a lot of fun taking you all on the journey from beginning to here ;)

This is a text widget. The Text Widget allows you to add text or HTML to your sidebar. You can use a text widget to display text, links, images, HTML, or a combination of these. Edit them in the Widget section of the Customizer.
Loading Comments...